Overview: Fecal transplantation (or transfaunation) involves the deposition of a relatively large volume of “normal” gut flora from one individual to another.  This procedure is performed commonly in people associated with numerous conditions (especially Clostridium difficile infection following antimicrobial therapy) and in with relative frequency in ruminant veterinary patients.  More recently, this procedure has been investigated in canine and feline patients as an adjunct to other therapies for various GI conditions.

History and Diagnostics: A 9-year-old female spayed Yorkshire terrier was initially referred to VRC in November 2017 for an abdominal ultrasound to investigate chronic diarrhea and weight loss over the course of three months that was unresponsive to therapy up until that point.  She had been on multiple courses of standard symptomatic diarrhea therapies including metronidazole, tylosin, probiotics, diet trials, and ultimately prednisone without any significant improvement.  Her diarrhea was significant enough to be causing low blood protein levels (protein losing enteropathy).

Her ultrasound revealed diffuse gastrointestinal thickening, and a second immunomodulatory medication (azathioprine) was added to her medication regimen.  When no improvement in GI signs occurred following the addition of this medication, she was referred for an internal medicine consultation three weeks later.  An endoscopic examination and biopsy of her GI tract was recommended but ultimately declined in favor of continued empirical treatment for a presumptive form of inflammatory bowel disease with associated protein loss since this condition is common in this breed.

While we can only surmise at the actual diagnosis given that an endoscopy was not performed, had we proceeded with this test, the results may have looked like the below image. This endoscopic image is from a similar dog diagnosed with lymphangiectasia, a condition that I thought may have been the patient’s underlying issue. 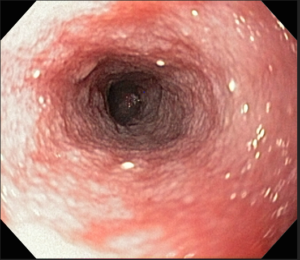 Figure 1: In this endoscopic image from another patient’s duodenum, numerous raised white nodules are visible, consistent with lacteal dilation which is often pathognomonic for a process like lymphangiectasia. 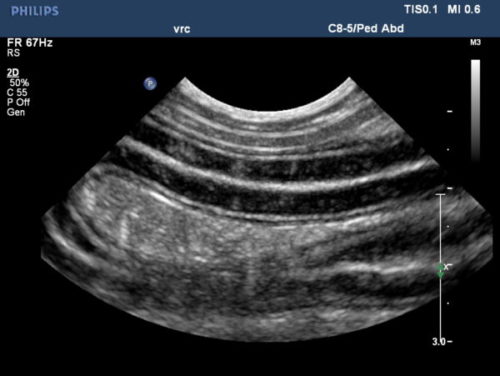 Figure 2: In this ultrasonographic image of another patient, multiple loops of small intestine are seen in longitudinal view.  Present are numerous hyperechoic linear striations perpendicular to the lumen, consistent with lymphatic (lacteal) dilation.

The patient was switched from azathioprine to cyclosporine, but there was concern she was not even absorbing these medications.  Injectable dexamethasone was initiated, but she continued to decline, reaching a lowest body weight of 9.4 lb (down from her highest of 17 lb in early 2017).  At that point the decision was made to attempt a fecal transplant as a last resort before her owners were considering humane euthanasia due to the refractory nature of her disease.

Procedure: On March 20, 2018 the patient was very lightly sedated with an intravenous dose of butorphanol.  The previously screened fecal donor (another VRC employee pet) provided a fresh bowel movement the morning of the procedure.  A portion of this was mixed 1:4 with saline and blenderized prior to being strained in order to remove larger particles from suspension.  A total volume of 10 mL/kg fecal solution was instilled via a 12 Fr red rubber catheter as far into the patient’s colon as possible, and she was kept from having a bowel movement for as long as possible to provide more contact time.  An alternative option is to perform fecal transplantation under general anesthesia, occasionally at the time of endoscopic examination (which allows for deposition of fecal solution into both the duodenum and the colon).

Immediate Outcome:  Following discharge, the patient’s bowel movements began to improve almost immediately.  She was subsequently tapered off of injectable dexamethasone, without the need to resume oral prednisone therapy.  Her other treatments were discontinued one after another, with no deterioration in her condition at that time.

Discussion:  Fecal transplantation is a very appealing option for dogs and cats with refractory diarrhea given the relatively low cost and risk associated with it compared to various other options.  It is also being actively investigated as a potential therapy for numerous other non-gastrointestinal conditions including resistant urinary tract infections and other autoimmune disease processes.  While not all patients may respond, this procedure seems to have significant potential. Fecal transplantation can be considered at any point in a patient’s therapy. 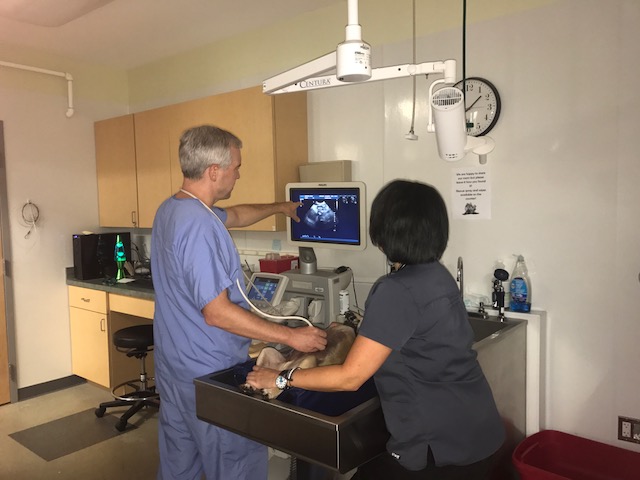