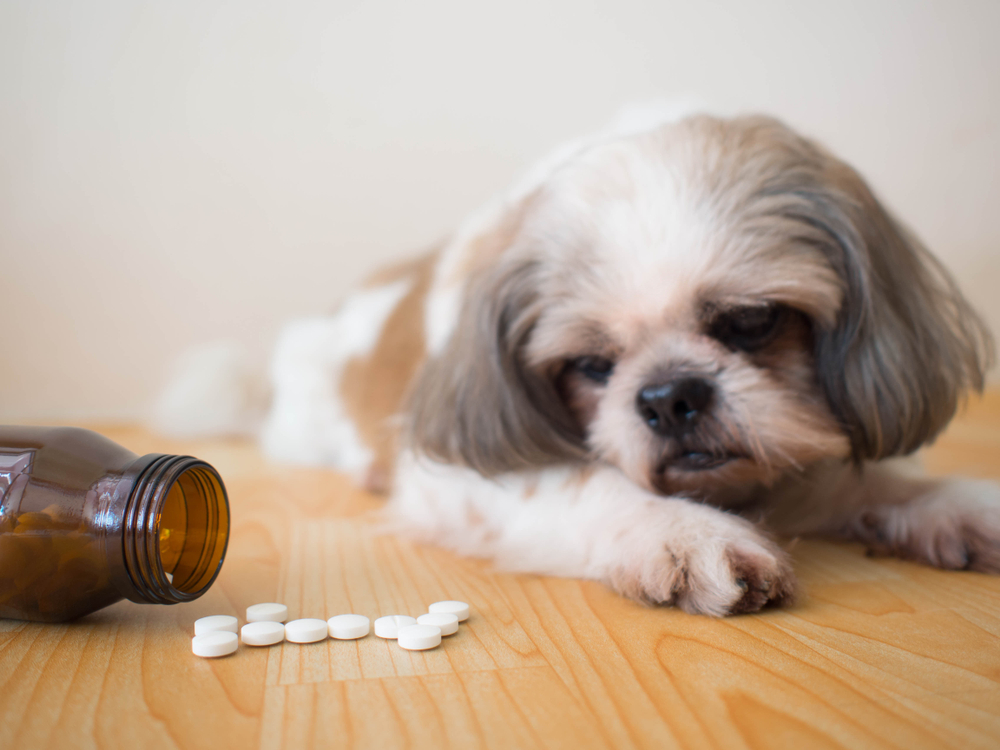 Sneezing and sniffling are very common during the winter months as more and more people come down with a cold or the flu. This means that many households have stocked up on common cold and flu medications. These medications can pose hazards to your cat or dog. VRC is here to break down some of the most common ingredients in these human medications and the risks they pose to pets.

Acetaminophen is a common pain reliever and fever reducer. It is toxic to both cats and dogs, but its effect on cats is especially dangerous. Acetaminophen can cause a condition called methemoglobinemia, which causes decreased levels of oxygen in body tissues. It can also cause liver failure. In cats, acetaminophen can cause swelling in the face and paws.

NSAIDs (non-steroidal anti-inflammatory drugs) can be very dangerous to pets. Both ibuprofen and naproxen are NSAIDs that could lead to gastrointestinal bleeding, ulcers, kidney damage, and liver damage. In cold and flu medications, these drugs are often combined with decongestants. Carprofen is another NSAID that you should be cautious of around your pets.

Decongestants, such as phenylephrine and pseudoephedrine, can cause big problems for our pets. While pseudoephedrine causes symptoms like restlessness, agitation, increased heart rate, muscle tremors, increased blood pressure, and seizures, it can lead to death if a large amount is ingested. Most cold medications containing a “D,” like Mucinex-D, contain pseudoephedrine.

Phenylephrine can cause similar symptoms as pseudoephedrine, but it is considered a bit less dangerous. If your cold and flu medication has “PE” on the package, it likely contains phenylephrine.

This medication is a non-addictive opioid. It is used in cold and flu medications to help with coughing. Pets who ingest medication containing dextromethorphan commonly exhibit symptoms including vomiting, lethargy, agitation, tachycardia, tremors, and seizures. Typically, vomiting is only treated when it is severe. In these cases, IV fluids can help. Tremors and seizures will likely be treated with benzodiazepines. Similar to humans, pets could be allergic to the drug and might battle hives and facial swelling. An allergic reaction is usually treated with antihistamines and corticosteroids.

Xylitol is an extremely toxic artificial sweetener that is becoming more and more common in cough drops. It can lead to hypoglycemia and liver damage.

Benzocaine is another ingredient that could be problematic. It is a local anesthetic used to numb the throat. Generally, it just causes gastrointestinal upset, but in large doses, it can be metabolized into compounds that can cause methemoglobinemia. Since it is a numbing agent, it can also cause aspiration.

A common symptom of colds and the flu is red eyes. Since treatment for irritated eyes is generally eye drops, they make the list for pets, too. Pet owners also don’t tend to think of eye drops as being a dangerous substance for pets. However, when ingested, eye drops can lead to bradycardia, hypotension, and depression.

What to Do If Your Pet Ingests These Medications

If your pet has ingested any of the above drugs, it is a good idea to contact your local 24/7 emergency pet hospital or the Pet Poison Helpline at 855-764-7661 or the ASPCA Animal Poison Control Center at 888-426-4435. Either of these resources can help you determine what course of action you should take. You should reference the product’s packaging and try to determine just how much of the medication your pet has ingested.

If one of these centers advises for emergency medical care, contact an emergency veterinarian right away. If you are in the Malvern, Pennsylvania, area, contact VRC in the event of cold and flu medication poisoning in your dog or cat. When you come in for emergency care, bring the medication packaging with you for the veterinarians to reference.

VRC’s emergency hospital is open 24 hours a day, seven days a week. If your pet has ingested any dangerous medication, our emergency team can help. If you are unsure of whether you should come in, give us a call at 610-647-2950. We would be happy to answer any questions you have about pet drug ingestion.